The 2014 Practicum was held at Zwolle in the Netherlands from Wednesday October 1st to Friday October 3rd. On Saturday October 4th there was a morning session devoted to ‘Recent Advances’.

Nine charts and an awful lot of numbers. What’s normal and
what abnormal? The 2014 European Practicum in Exercise
testing and interpretation was held in Zwolle the
Netherlands. Three and a half days of lectures and practica
were an ideal combination to enhance the skills of exercise
testing and interpretation. Almost 100 participants from
all kinds of different disciplines (cardiology,
pulmonology, clinical physiology, rehabilitation, sportsmedicine
and anesthesiology) and countries gathered in
Zwolle to learn from experts in their field. Different than
in other years we had a lot of subscriptions from sport
physicians. This demonstrates that the practicum is both in
width and depth accessible for professionals interested in
exercise testing and interpretation.
Although Prof Wasserman wasn’t able to be visit the
practicum, we thank him and the rest of the team for the
informative and pleasant days.

The organisation for the Practicum was headed by Dr Aernout Snoek who may be contacted via email at wasserman2014@isala.nl

The venue of the Practicum was  http://www.nieuwebuitensocieteitzwolle.nl

Zwolle is about 100km from Amsterdam, with the venue and hotels nearby.

The 2015 „European Practicum on Cardiopulmonary exercise testing“ will be held in Munich from
4th – 7th November 2015. There will be a teaching course on the first three days covering the
main topics of Physiology, Performing and Analyzing a Cardiopulmonary Exercise Test, as well
as the clinical application of the test.

These three days of teaching will include tutorials in small groups as well as demonstrations
of exercise tests in healthy subjects and patients. On the last day you are pleased to offer
current CPET projects or ideas for new projects. They will be reviewed by the faculty and you
will get valuable advice. Also new projects from the faculties’ institutions will be presented.

The program can be downloaded from
http://cpxi2015.com/de/Home/Program.html .

You are welcomed in Munich in November 2015.

Alfred Hager
(Chair of the 2015 Practicum) 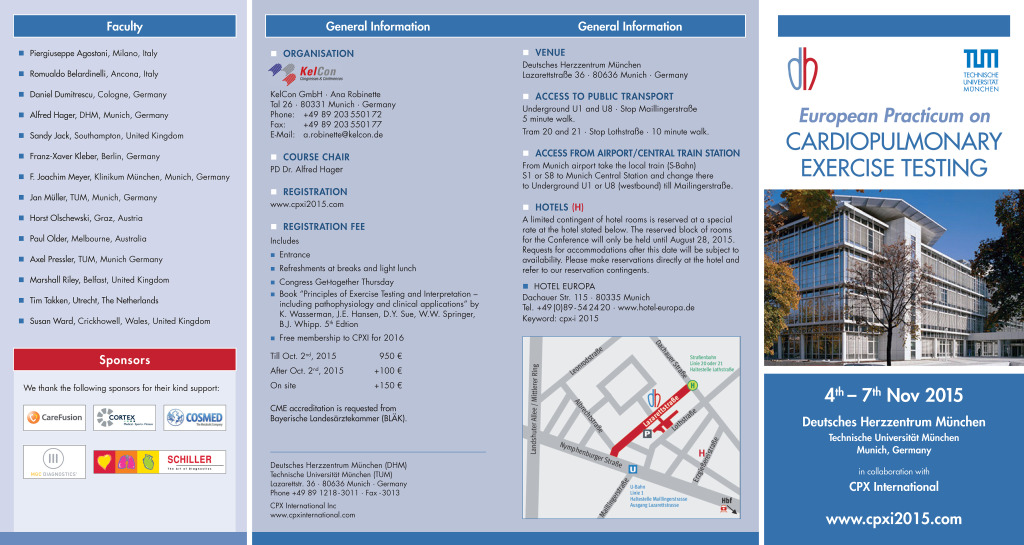 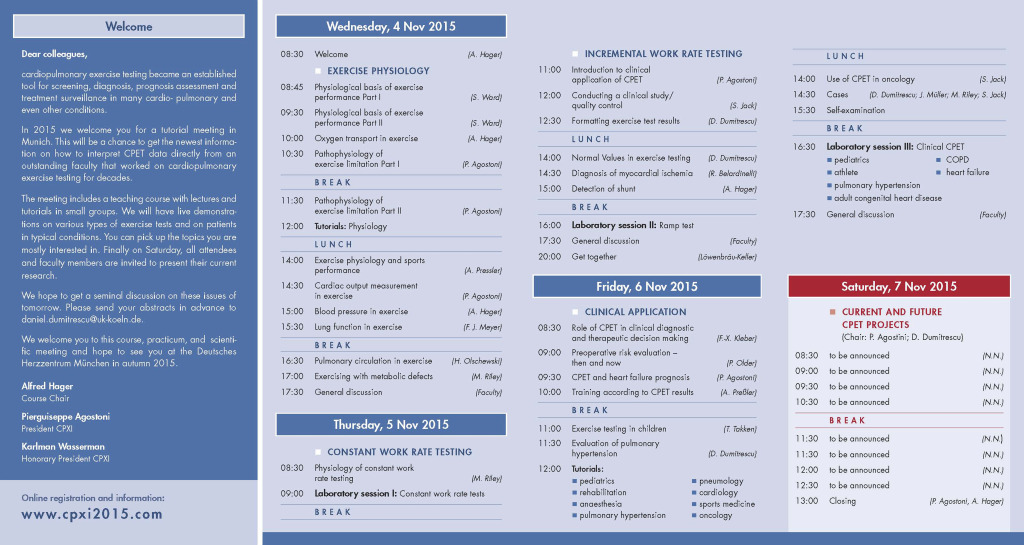 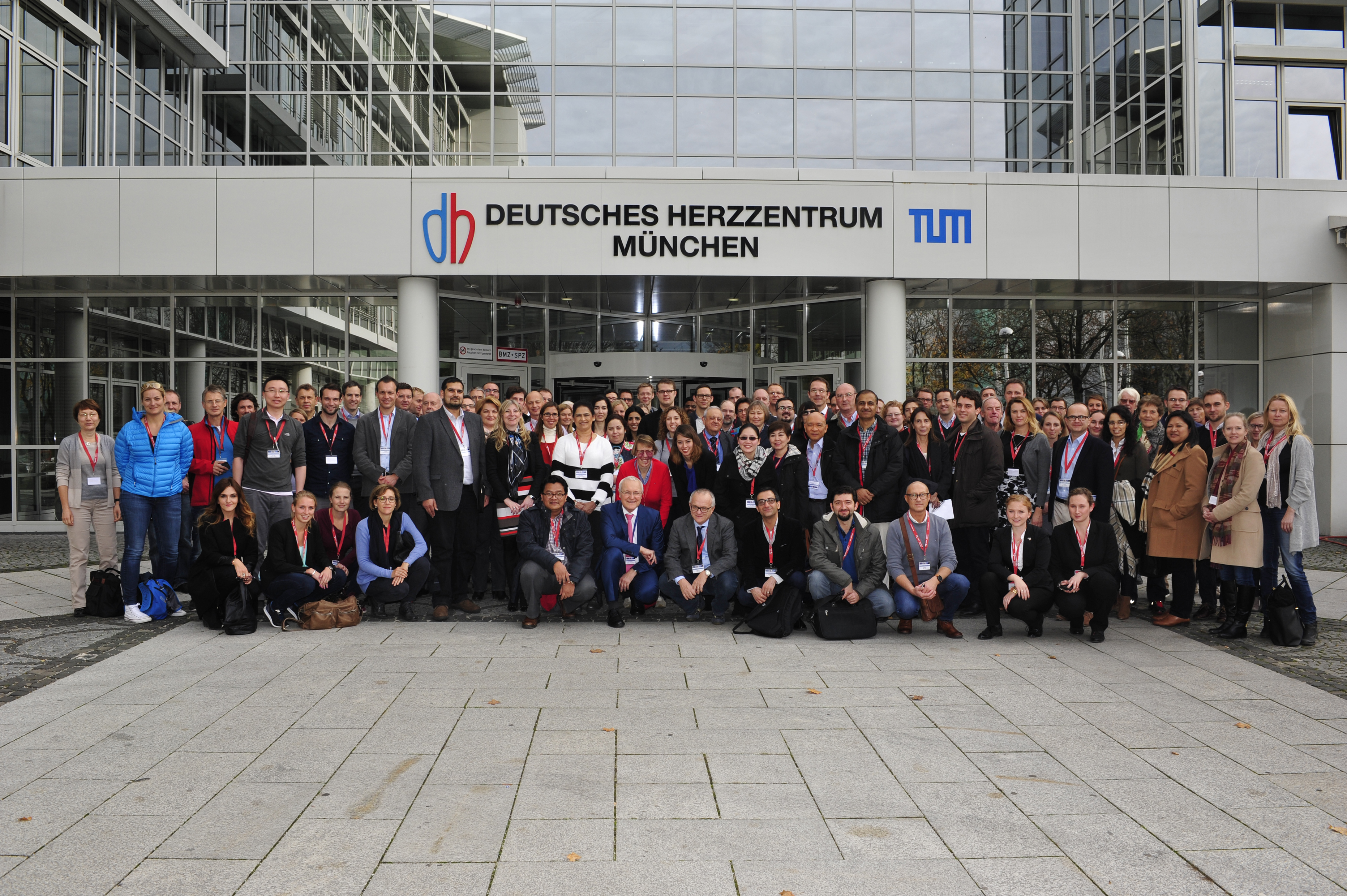 The Practicum was very well attended and run in its entirety at Centro Cardiologico Monzino. This is a Hospital devoted entirely to patients with heart disease whether that be medical or surgical.
Milan is a large very old city with a host of exciting antiquities including the magnificent Cathedral and Castle. Professor Agostoni also found some very exciting and different restaurants.
The programme was the traditional European Practicum format with three days of lectures, tutorials and practical laboratory sessions. No vote by the Board was taken over the format of the Practicum but it was felt that the planning of the tutorials should be left to the local organisers. Several major players in the cardiopulmonary industry were represented; these included Carefusion, Cortex, Cosmed, Schiller and Geratherm.
The physiology lectures were given by Professor Susan Ward and despite having taken an interest in physiology over many years, I learnt new information at every Practicum. It was very good to see that the lectures kept pace with current issues such as neoadjuvant therapy and the MECKI score.
An innovation this year was the introduction of three prizes to the best research papers presented to the Research session on the Saturday morning. The Board had decided to award each of the best three presenters a prize of US$1,500. The winners were, in no particular order, Stefania Paolillo, Felix Gerhardt and Roberto Badagliacca. It is hoped that these awards will be awarded each year.
It is gratifying to see registrants from so many countries and I noted the presence of registrants from mainland China. 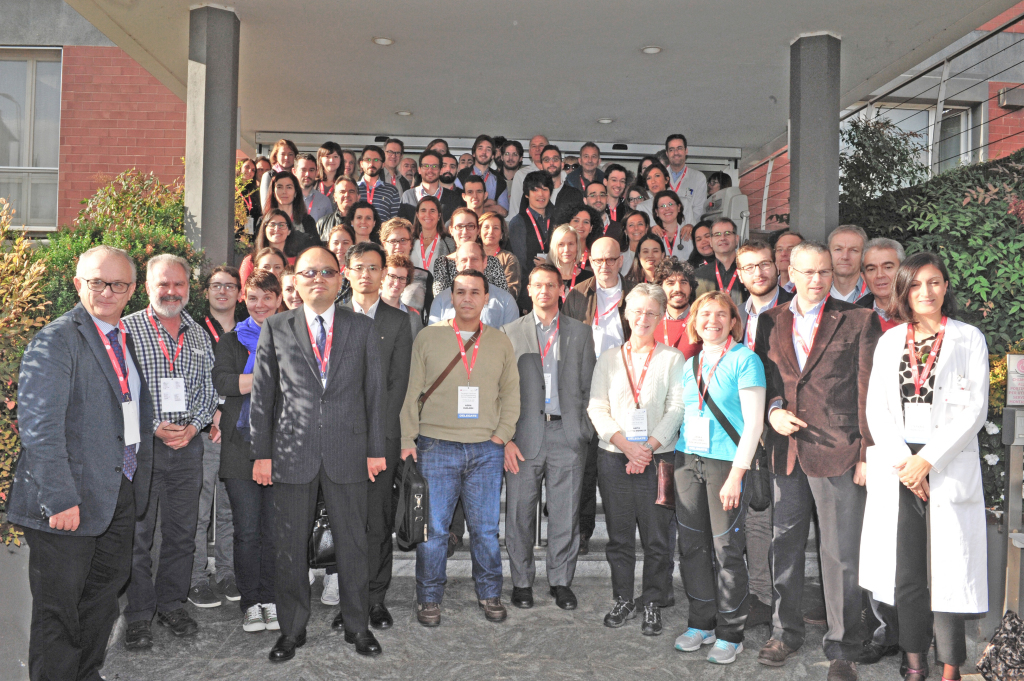 This is not the best photograph as a lot of the ‘models’ were in shade!